I know you’re all getting ready for Christmas, and summer holidays are the last thing on your mind, but I’m always thinking about them! So much so I’ve already booked a little jaunt for next year…watch out Naples, we’re heading your way!

Also, Christmas has kind of consumed me a bit, and I’ve fallen behind with my blog posts, so here, right in the middle of winter, I’m going to take you back to another instalment of our holiday in Italy this summer. 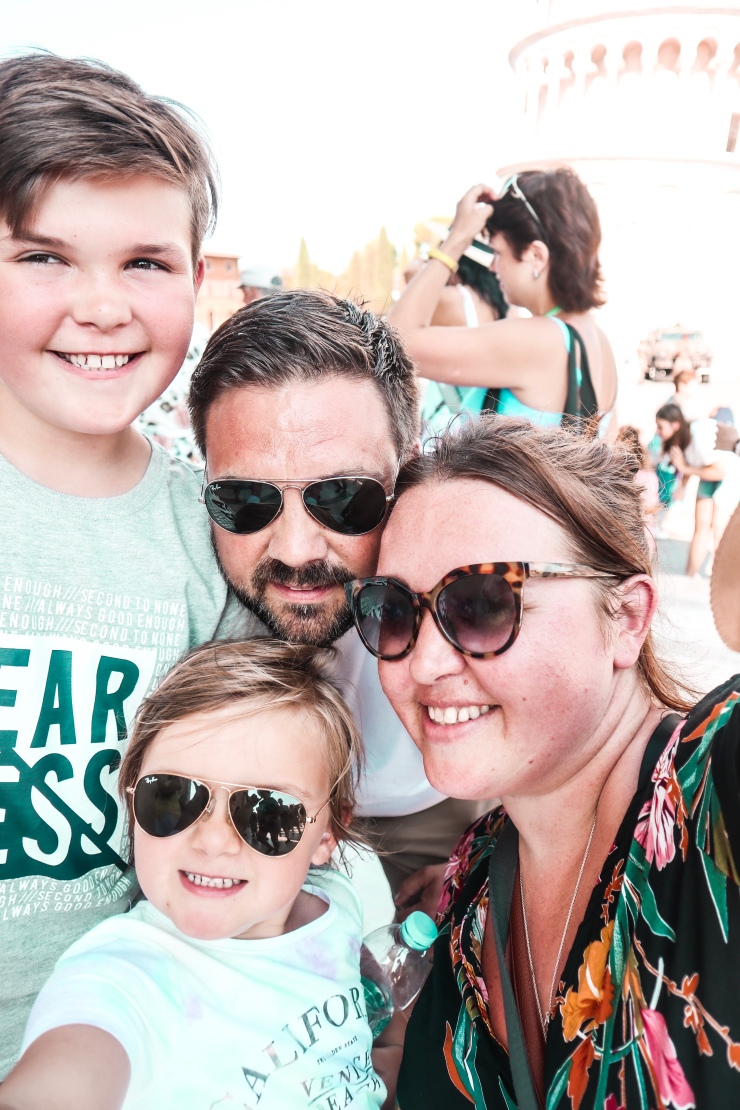 I ended the last post in a little village next to Lake Como. From there we moved on to Venice, and then Pisa, so that’s where I’ll take you next…

I have dreamed of going to Venice all my adult life. I had high hopes of wandering the tiny streets, in between the canals, sipping champagne on a gondola, a Bellini in Harry’s bar, watching glass making, maybe even attending a Venetian ball…all the things you see in movies. My personal reality was a lot different…

My Venice was 40 degrees of sweltering, sweaty heat. It was hoards of people cramming into an overpriced waterbus. It was crowds in St Marks Square, so deep you couldn’t see the buildings, and passing through took all my elbow power. I was indiscriminate in my shoving. It was claustrophobic, noisy, and quite violent (that was me, I was the violent one 😂) It was the kraken deciding that was the one day of holiday where she would be an arsehole for the ENTIRE day. But there was a gondola, there were Aperol Spritz, there was a wedding anniversary meal, and it was truly beautiful, if you held your nose on the water bus (there was a serious lack of deodorant being used) 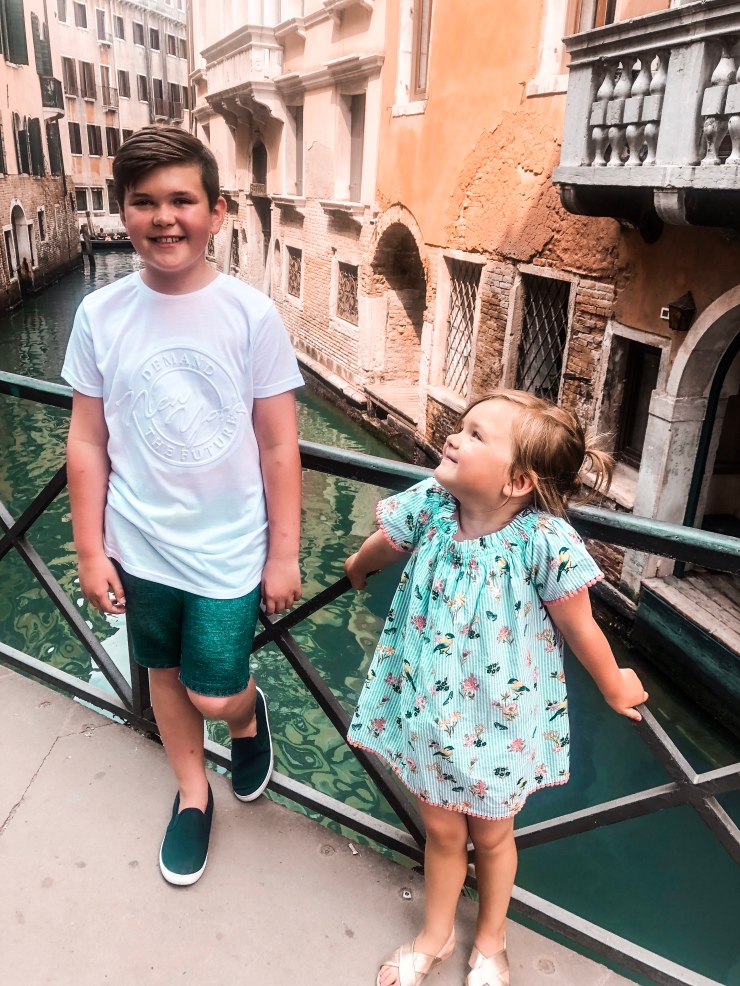 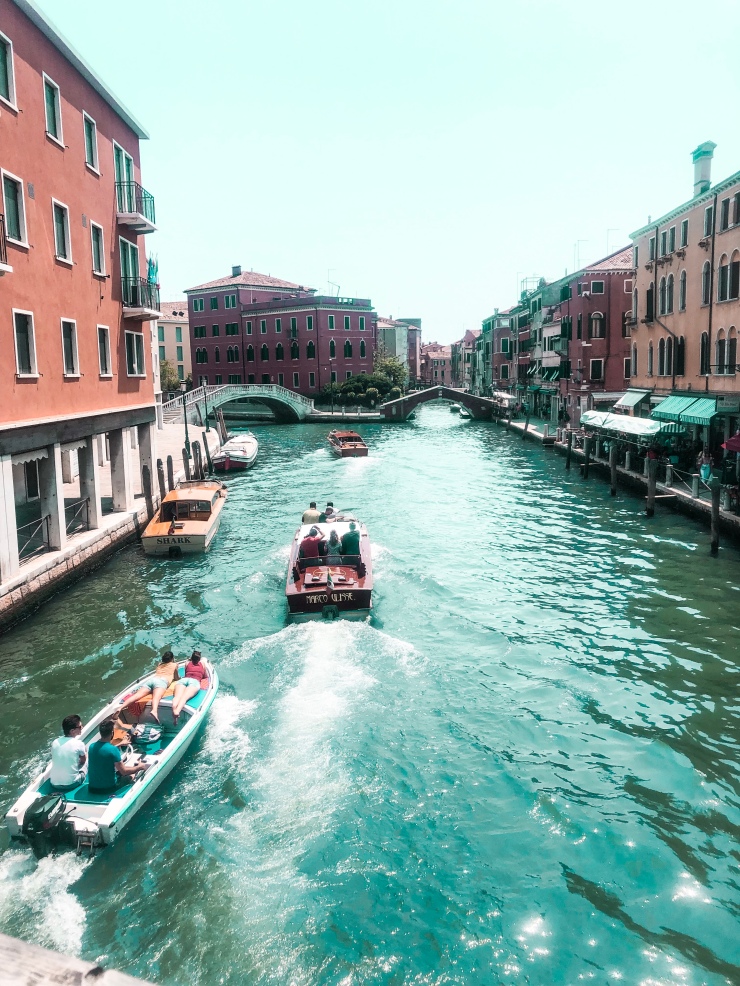 We stayed just outside Venice in Treviso. A beautiful little town with canals (less in number than Venice) and a lovely square in the centre, perfect for mooching around, and having a meal watching the world go by. We rented a flat through booking.com called Casa Roggia. You had to park a short walk away, but you could unload right out the front so it wasn’t really an issue. It was perfect for what we needed and the host was super helpful. Venice is about 30 minutes away in the car, or you can get a train really easily too.

We had 2 days in Treviso. One we spent in Venice, the other we spent recovering on the beach. 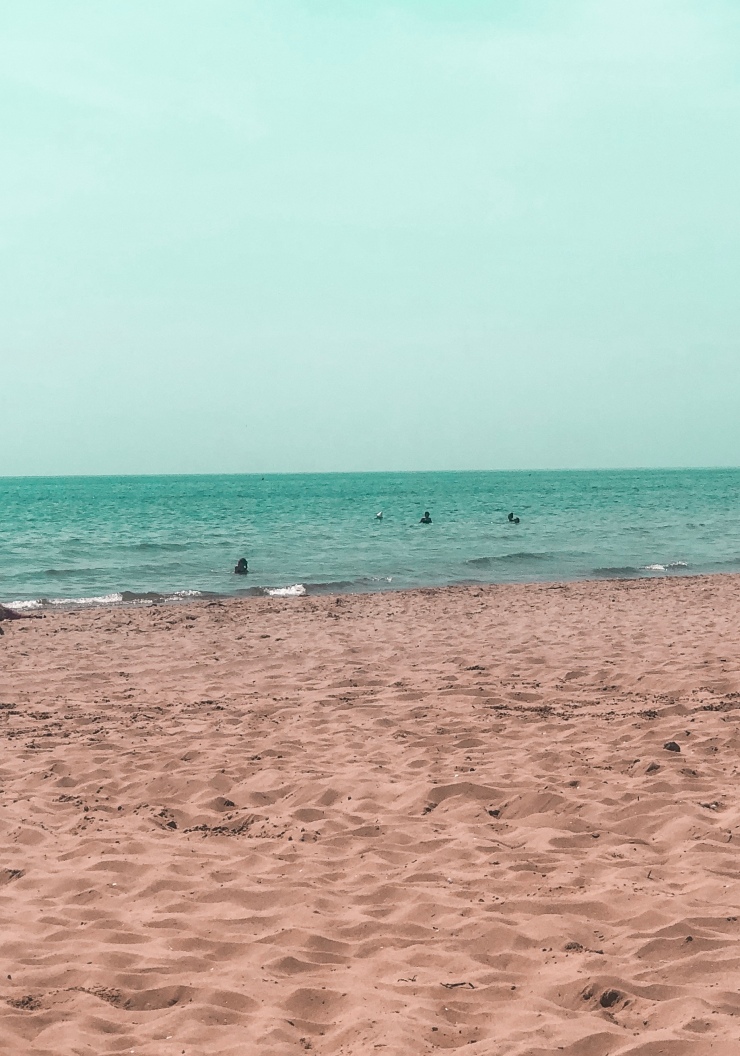 The beaches on the East coast of Italy are beautiful. We headed to a resort called Jesolo and in particular Oro Beach. There is 10 miles of sandy beach along the Adriatic Sea. The water is shallow so perfect for children. I reckon you have to go out a good 20m before it comes up to your waist. There are beach bars serving snacks and drinks, and an ice cream cart comes round at regular intervals. It took me a while to work out the sunloungers. Not how to use them, I’m an expert at laying on a sun lounger, but how to book and pay for them. I’m used to the antiquated ways of Spain, where you sit on one and eventually a man comes round and takes some cash of you. This is much more advanced, with booking and payment via the website here Oro beach. I think there is a cash desk somewhere, but I’ll be buggered if I could find it. There’s parking right nearby too, which is super handy when you’ve got children and the ten tonnes of shit you have to cart to the beach just to keep them entertained for a day. Sun loungers are about 15€ for 2 and they come with a handy safe. That’s a bit shit for me, because I lose my excuse of guarding the stuff while the mister takes the cretins to the sea (meaning I can sit and drink my beer in peace)

A lot of the other sections of beach are owned by hotels and beach clubs, so sun loungers are reserved through them. 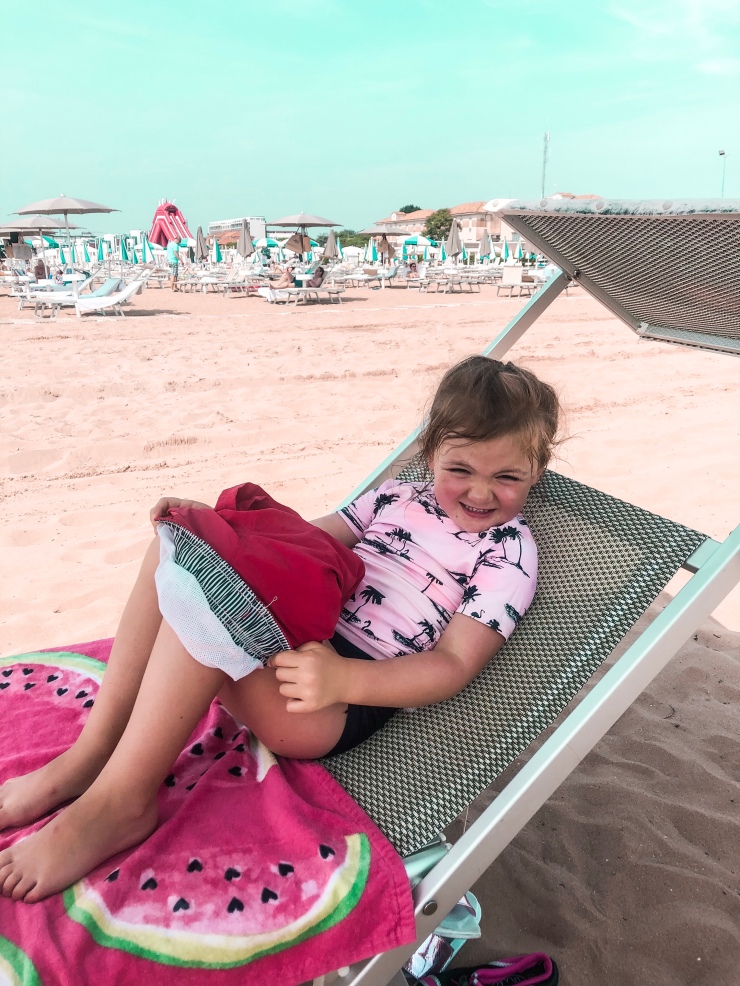 It’s not the most beautiful beach by a long shot. It’s a man made tourist trap. There are people that will criticise you for going to Venice and “wasting” a day on a beach, but do you know what? I couldn’t give a flying fuck. It was hot, the beer was cold, the kids didn’t want to walk round another church, and it was the perfect way to relax before we piled back into the car for the next leg of our journey.

My top tips for Venice and Treviso

Don’t go when there’s a heat wave, it’s unbearable! I’ll be heading back to Venice I’m sure, but I’ll be going outside of the summer months.

Parking is fairly reasonable and straight forward if you’re driving. There’s a whole island devoted to a car park. From there you catch a water bus (vaparetto) into Venice itself. All quite straight forward. The stop on the water bus is Tronchetto. You can also get the people mover from here that’s a bit cheaper (but nowhere near as fun or pretty)

Watch out for the little arsehole that accosts unsuspecting tourists as they walk out of the car park, trying to sell them passes for the water bus. They are way more expensive. Tell him to poke it and walk down along the water front, past where the cruise ships dock and you can buy your passes and jump on the bus there.

Buy a day travel pass for the water buses. They aren’t cheap but it means you can hop on and off all day with no bother. 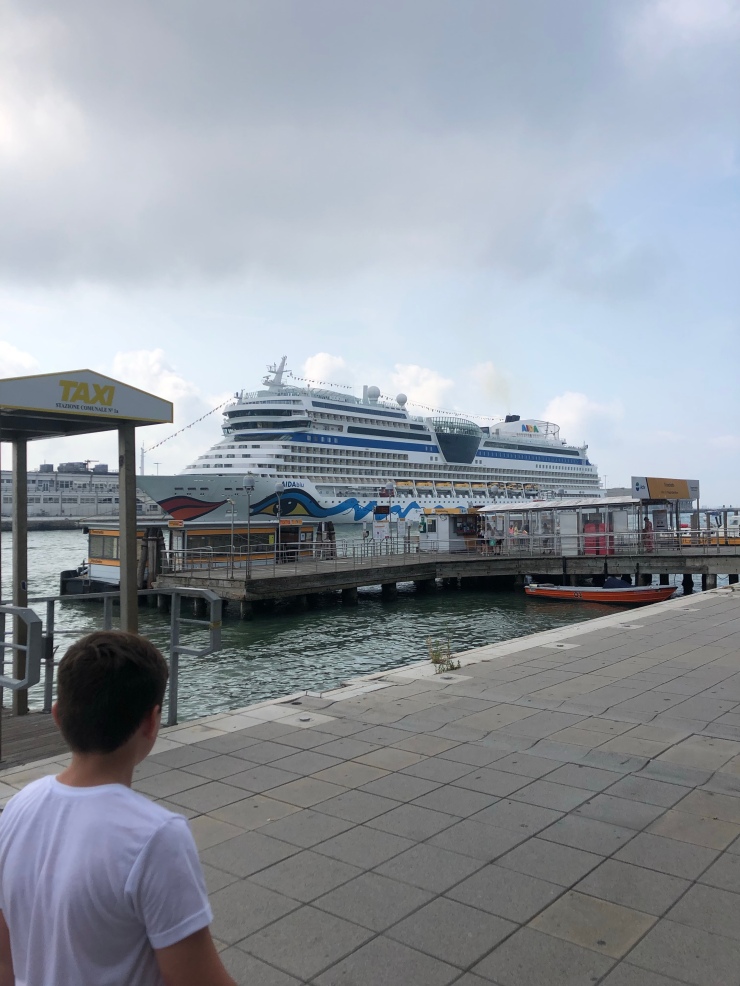 Have a ride in a Gondola! Yes it’s touristy and a bit tacky, and at 80€ for half an hour, it’s not cheap, but you can’t come to Venice and not do it. My tip? Head away from the grand canal where the boat traffic is heavy, and find a station a little further back. Your ride will be much more peaceful and you’ll go a bit further because you aren’t held up by loads of other boats. 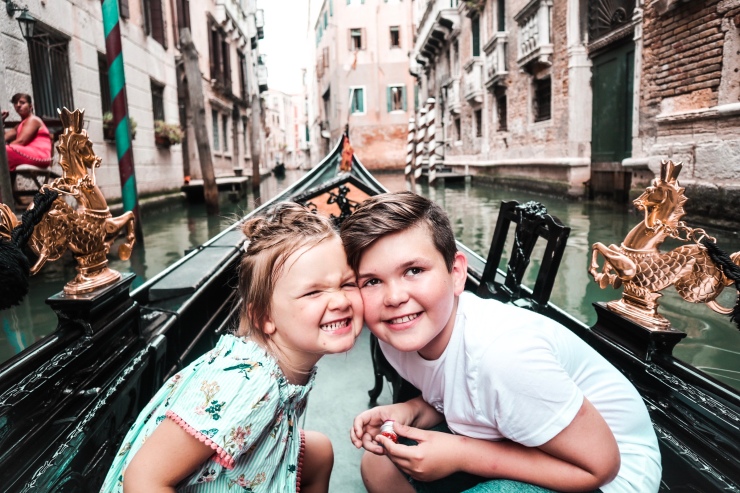 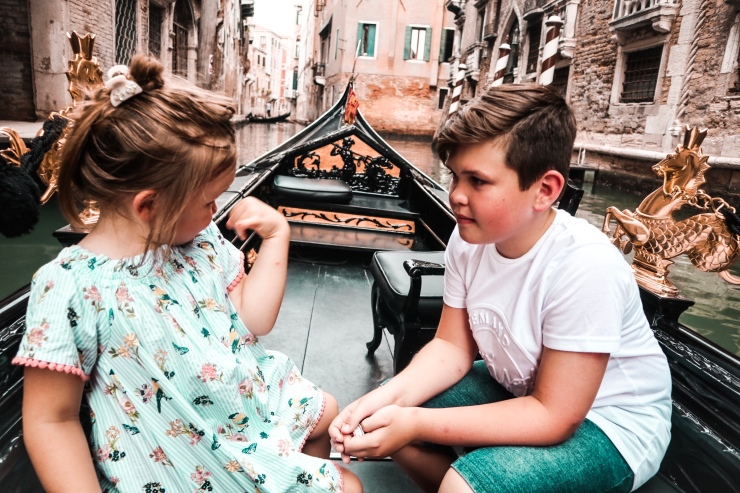 The same with the restaurants, head away from the main thoroughfare and you’ll find some hidden gems. 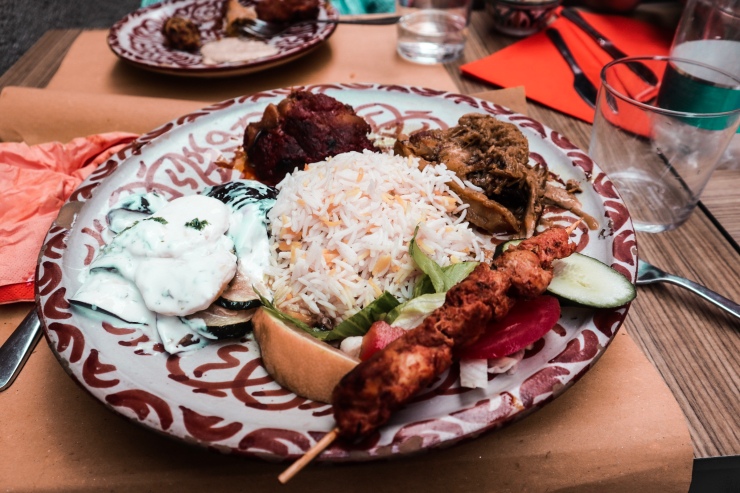 We didn’t visit the basilica or any of the main sites, it was just too hot and too busy. If you do want to, the best advice I can give you is to book in advance. The queues on the day were up to 3 hours long! Sod that for a game of soldiers, that’s a waste of good wine drinking and pizza eating time!!

Pisa was our last stop in Italy. It was the boys request to see the leaning tower, so we had to add it in. It was less than 4 hours to drive from Treviso, so not a bad journey. 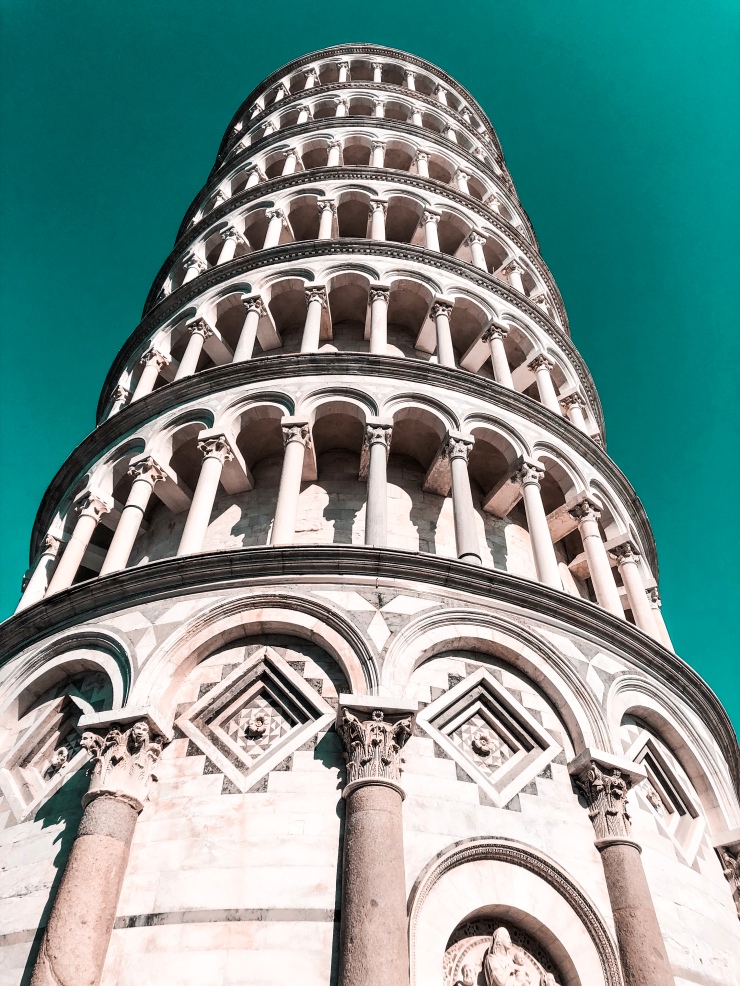 We stayed right in the centre by the train station. Much to the kids delight there was McDonald’s!! Could they have been getting sick of pizza?? Surely not!

It doesn’t feel the safest, there are a lot of street drinkers hanging around. I didn’t see them cause any problems, and they don’t really bother me too much, but I can see how some people might not like it too much. I would advise not leaving any valuables in the car though just in case.

We were a short walk from the Leaning Tower, so of course our first afternoon we headed straight down there. I had booked online to climb the tower. Again it was nearly 40 degrees so I wasn’t too disappointed that the kraken was too young to do it and I had to sit on the cool grass with her waiting for the other 2. The queues are huge so definitely book before you go. It’s not too expensive and actually doesn’t take that long. My exercise hating husband said it wasn’t as strenuous as he thought it would be, so by that reckoning anyone could manage it. 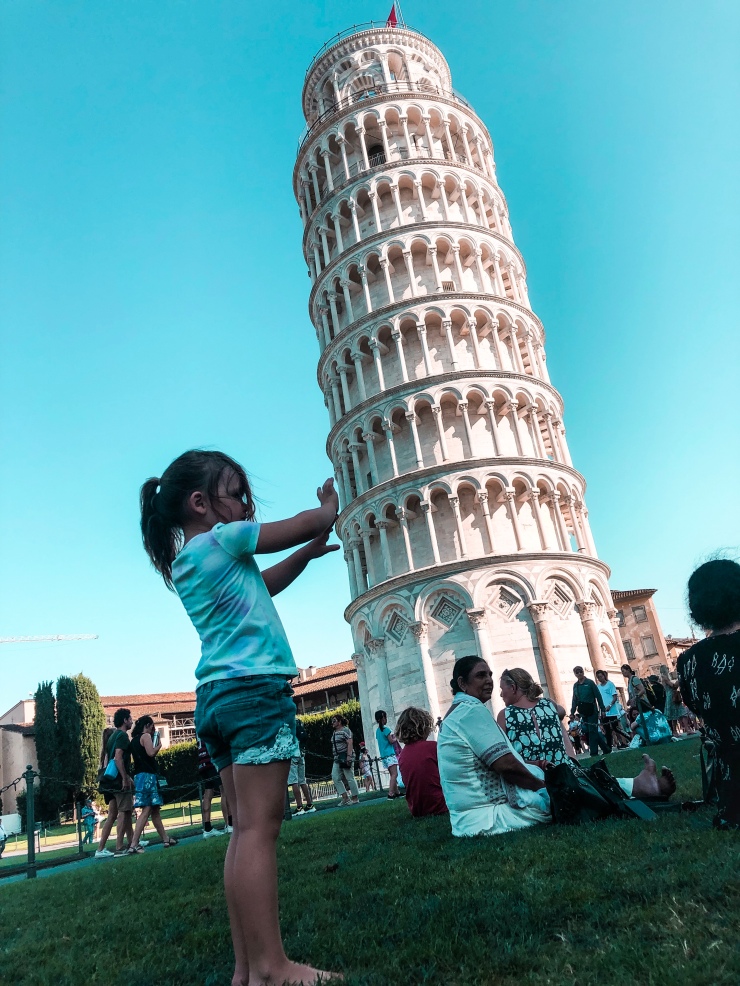 Your ticket will also cover the cathedral, which is a haven in the heat! I could have stayed in there all day.

We only had 2 nights here, so the second day, on the recommendation of some friends, we headed into Lucca. Lucca is a beautiful walled city only a short drive from Pisa. We had a lovely morning strolling the streets, shopping, and of course eating! 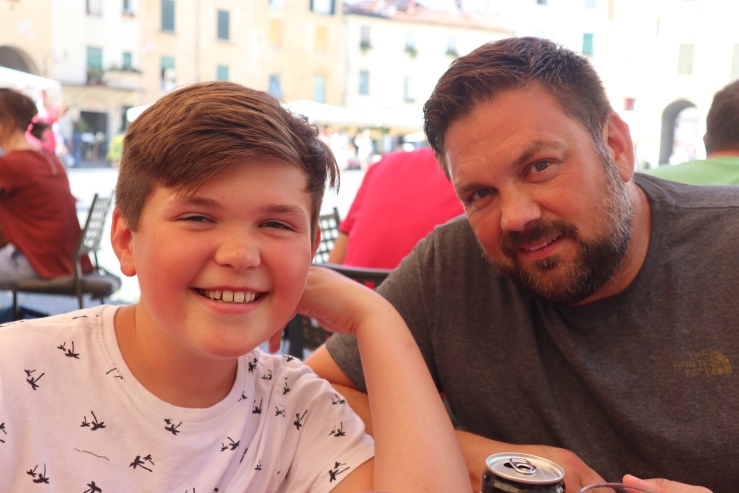 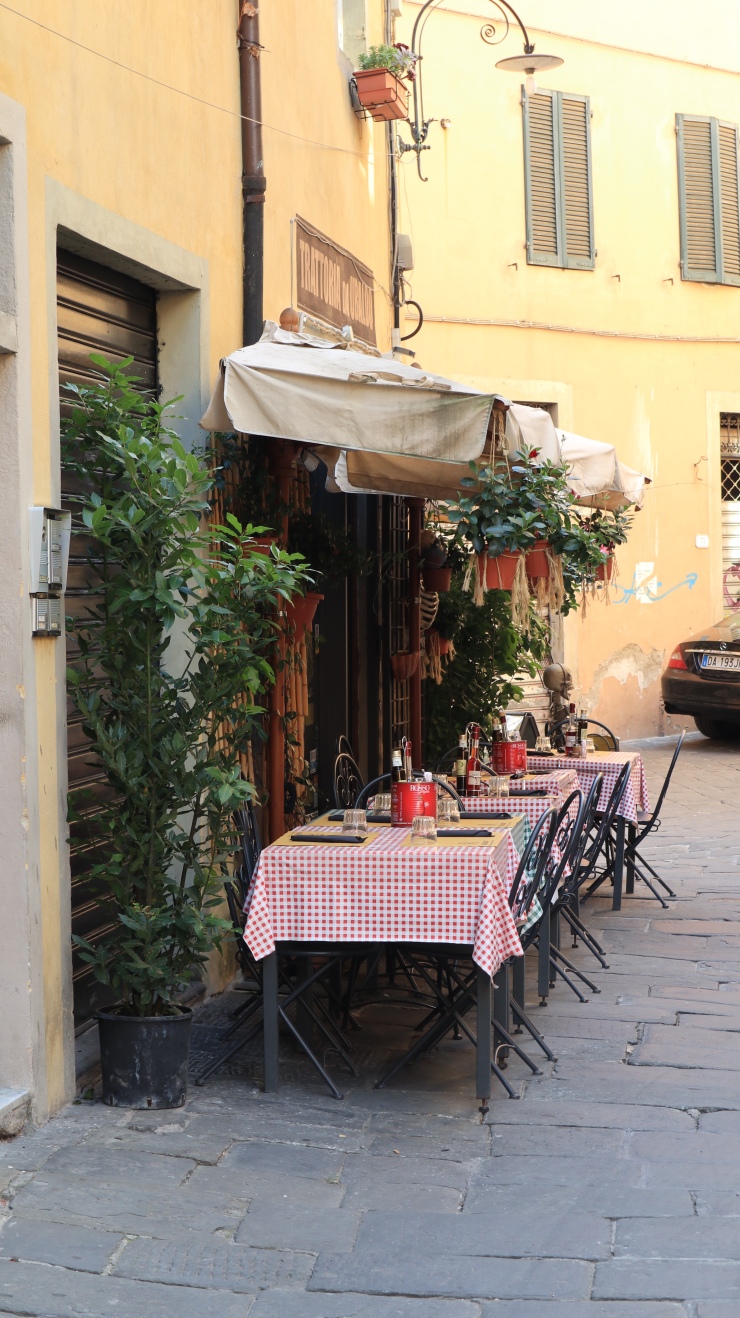 The beach was calling to me again, so in the afternoon we headed to Marina di Pisa for a dip in the sea. Again, the beaches are perfect for children, with little man made coves that stop the sea being too choppy. We found a fabulous cafe, that in the evening fills the beach with blankets and fire bowls, and you can sit and watch the sunset while drinking a cocktail. The Sunset cafe was one of my highlights of the whole trip. I would go back tomorrow if I could. 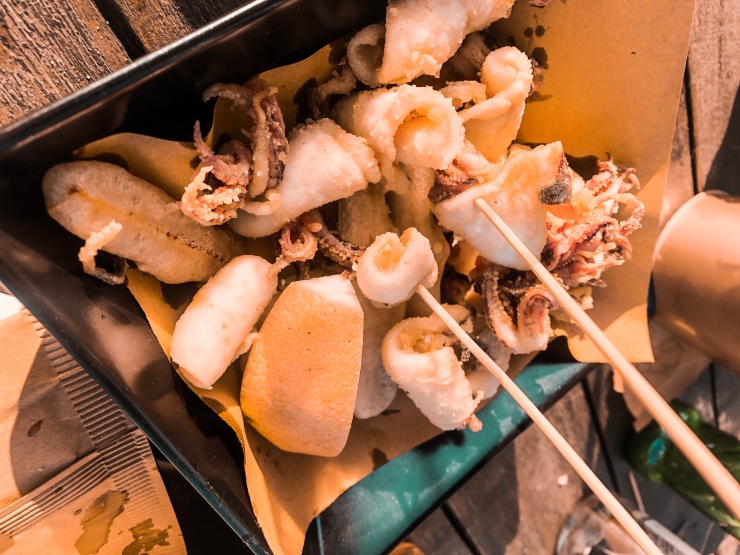 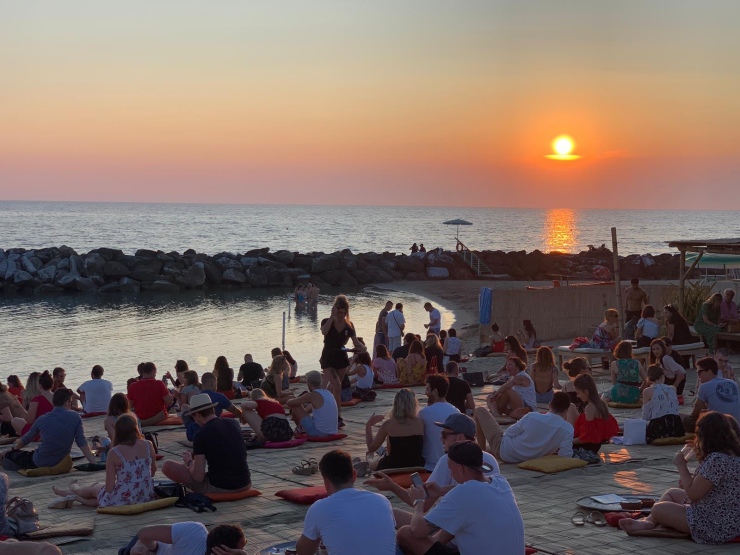 Book your tickets in advance for the tower and cathedral to avoid the queues. Also, take the picture. The one you really want to take. You’ll feel like a knob, but everyone is doing it so you might as well. 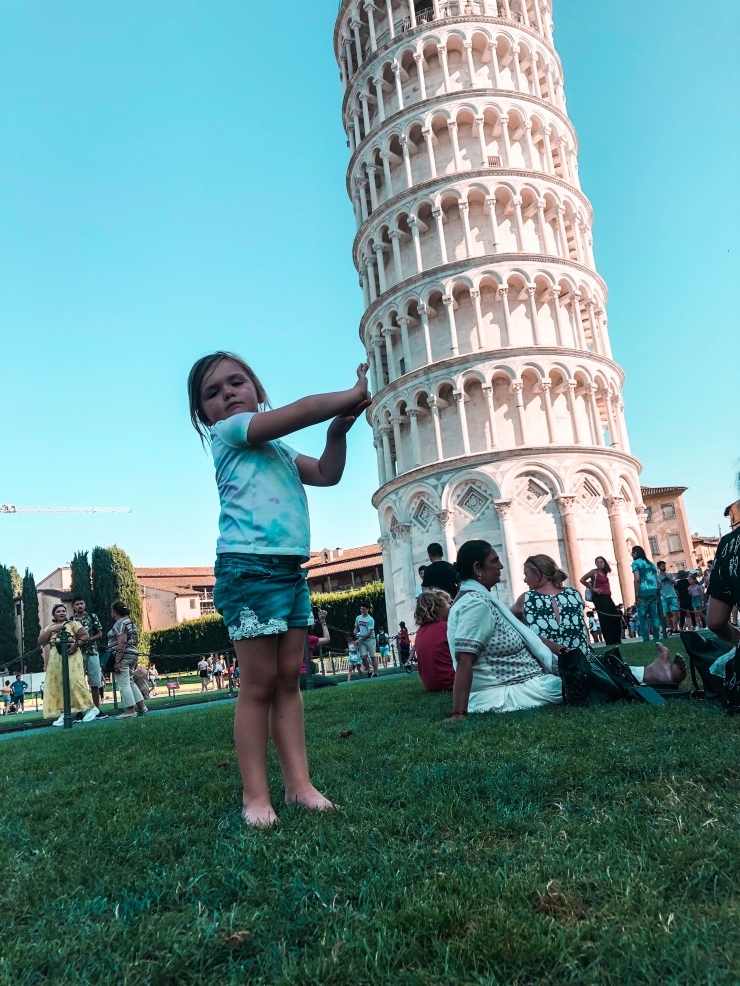 You have to pay for the public toilets near the tower. They don’t charge for children so grab one and take them with you and you get to pee for free 🙂 make sure the child belongs to you or is known to you. I’m not advocating abduction for the sake of saving a Euro or 2. 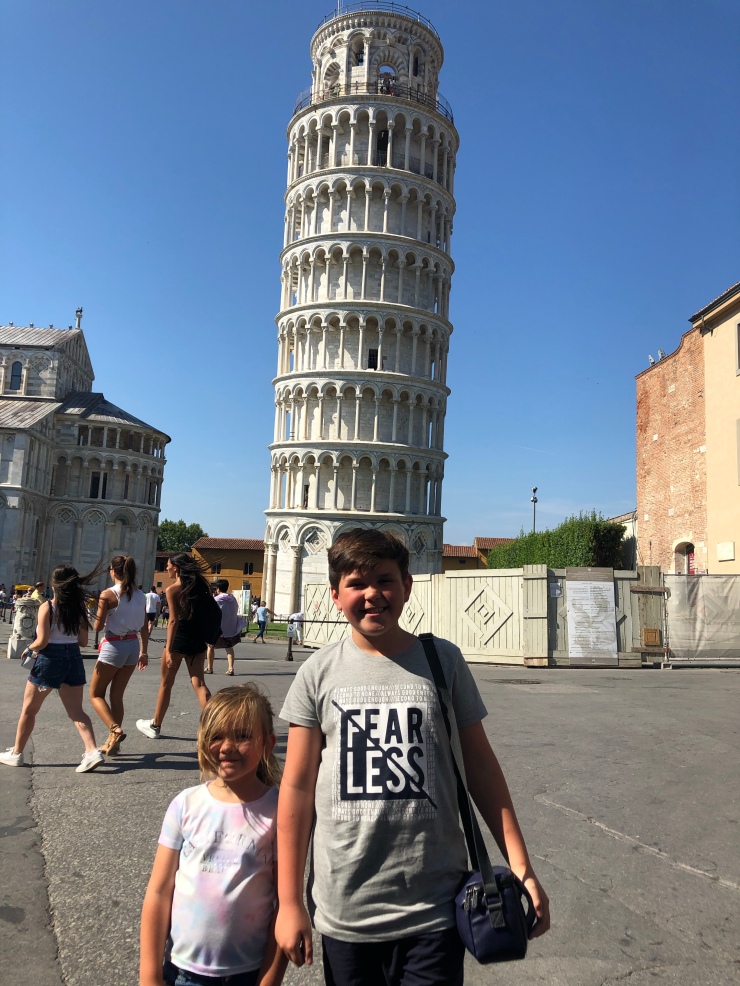 The further away from the tower you go, the cheaper, and better, the food gets. You can pick up a pizza or pasta dish fairly cheaply in most restaurants. The ones with a view of the tower are extortionate.

Be careful of the public parking just outside the city. It’s rife with car crime. If you aren’t staying nearby, park outside and get the train or bus into Pisa. Take all valuables with you.

Go to Lucca. It’s beautiful. If you’ve got longer than we had, read this post by Hello Cuppies for some great ideas of things to do.

You absolutely have to go to the sunset cafe! You can’t visit Pisa without it.

That’s it. We were on the home strait. Just a quick visit to the Alps, a stop in Disneyland Paris, and a brief jaunt into Belgium before we go back to normality!

1 thought on “Travelling Italy with Kids…part 2”